The aerial images below show the west side of Caernarfon Castle (EN: Caernarvon). The closest tower is the impressive octagonal Eagle Tower. The castle was build by King Edward I of England between 1285 and 1330.

The photographs were taken in July 2014, the camera was lifted by a Kite. The exact location is shown on the map. 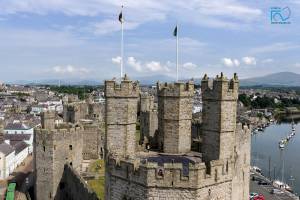 Exploring Castles: Caernarfon Castle was a project of phenomenal expense and scale. Edward I spent a vast amount of money on building Caernarfon Castle. Records at his time show an expenditure of £22,000 - a huge sum, considering that the daily wage for a skilled craftsman back then would have been about 3 pence per day (and we're talking old money, where there were 240 pence to one pound!). To put it another way, £22k was more than the Treasury would have taken a year in tax!

Hundreds of tradesmen and equipment would have come vast distances to work on the castle. We know that timber and supplies were shipped in from Liverpool (using sea routes to Caernarfon) Anglesey and elsewhere in North Wales; and that labourers came from as far as London to work on the construction.

More historical and architectural information can be found here: